How do we make human rights a reality?

On the anniversary of the proclamation of the Universal Declaration of Human Rights, Natasha Moore asks: How are we doing?

Take a moment to google “human rights” and then click the “News” tab. On the day I’m writing this, here’s a non-exhaustive list of the stories that surface:

Free speech is being muted.

Can governments mandate a COVID vaccination?

Formula One is being called on to address human rights violations in the countries where it holds races (in focus: Bahrain).

A female athlete with naturally high testosterone levels is taking World Athletics to the European Court of Human Rights over regulations that restrict her from competing.

One of the world’s most ambitious conservation projects is under fire for trampling the rights of the local Baka people in the process of protecting the Congolese rainforest.

The spectrum covers some of the most hotly contested territory of our common life, locally and globally. Most of the issues don’t have much in common – apart from their framing against the backdrop of human rights, and clashes between them: parents vs children, the environment vs indigenous peoples, an athlete vs her competitors, public health vs individual freedom.

Human rights talk, at least, has become pervasive, even if the reality lags.

It’s more than 70 years now since the proclamation of the Universal Declaration of Human Rights (UDHR), an imperfect but ambitious formulation of how we ought to treat each other – one that claims to apply (see: “universal”) to all peoples and all nations. As my quick google suggests, human rights talk, at least, has become pervasive, even if the reality lags. When we reach for ways to articulate the wrong we do to one another, why it’s wrong, and how things should be instead, the default shelf we reach for is the language of human rights.

Whether it’s the right or the best way to think about all this is strenuously debated. Few would deny that the formulation of human rights as a real thing that exists and should be respected has achieved some good; many have questions, or concerns, about its adequacy.

For instance, have we majored on “rights” and neglected the “responsibilities” side of the coin – what are the individual’s moral duties, alongside what is owed to them? What philosophical grounding can we find for rights that people can agree on, even if they believe wildly different things about reality? Is the idea that humans are inherently valuable and that rights inherent in them are merely a useful fiction – and if so, how long can we really sustain it?

The history of human rights shows that the idea of the dignity or value of every single human being is by no means self-evident. Nor is it an invention of the Enlightenment, or the French Revolution. Rather, the Judeo-Christian insistence that every human was created in the image of God cuts across the deeply obvious intuition, common to the cultures in which Christianity was born, that some people were far more important, useful, dignified, and worthy than others. Many, if not most, of those “others” – slaves, women, children, foreigners, the poor, the disabled, the very ill – were seen as disposable.

The story of what happened when Christians began treating other people as though they were made in the image of God is one I only encountered when I actually started doing research for a documentary and book on the influence of Christianity (for better and for worse) on our world. It’s a story that is slowly becoming more widely acknowledged with high-profile (often secular) accounts such as Tom Holland’s book Dominion: How the Christian Revolution Remade the World.

The idea that transformed the ancient world and underpins the entire values system of Western culture – the idea that every person is made in the image of God – started not as an edict from on high, but as a grassroots movement, a community that acted on that as though, however unlikely their convictions about the abandoned baby or the slave girl may have seemed to the world around them. The UDHR, centuries later, codifies that conviction that the human person is to be respected – a conviction now shared by many around the world who don’t accept the premise of a Creator who bestows and guarantees that worth. 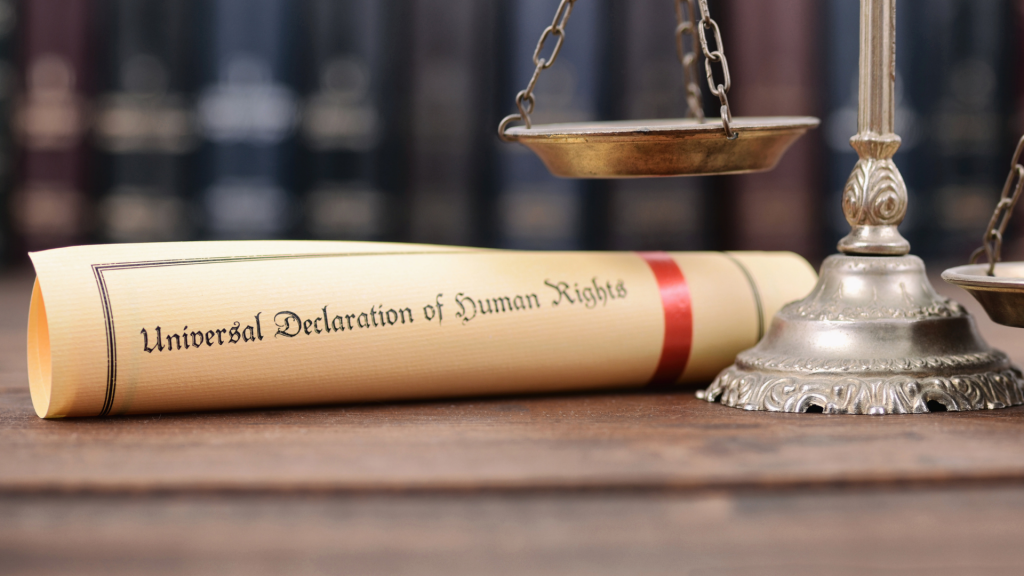 But law on its own is never enough. The letter kills, so to speak, but the spirit gives life.

To some extent, the human rights “clashes” we’re navigating as a culture arise simply from the exigencies of living side by side with fractured and messy people in a fractured and messy world. But surely, at times, they also represent a failure of imagination. As we apply the language of human rights, and the strictures of the law, to these fraught situations, the gears grind and (at worst) screech to a halt. Increasingly, we lack what is meant to smooth the friction: a genuine value for one another.

The Australian writer and philosopher Raimond Gaita has written movingly about an experience he had as a teenager, working as a ward-assistant in a psychiatric hospital. Some patients had been there for decades, and were judged incurable. Many of the staff, Gaita recalls, treated these patients like animals, but a minority of psychiatrists insisted on their dignity and worked to improve their conditions.

Gaita admired these doctors, yet he writes about the day a nun came to the ward to visit the patients:

… everything in her demeanour towards them – the way she spoke to them, her facial expressions, the inflexions of her body – contrasted with and showed up the behaviour of those noble psychiatrists. She showed that they were, despite their best efforts, condescending, as I too had been. She thereby revealed that even such patients were, as the psychiatrists and I had sincerely and generously professed, the equals of those who wanted to help them; but she also revealed that in our hearts we did not believe this.

Reflecting on what he witnessed that day, Gaita tries to determine what role her faith played in her treatment of the patients:

I do not know how important it was that she was a nun. One is inclined, of course, to say that her behaviour was a function of the depth of her religious beliefs. Perhaps it was, but typically beliefs explain behaviour independently of their truth or falsity: a person’s false beliefs explain his behaviour as effectively as his true ones. Seeing her, however, I felt irresistibly that her behaviour was directly shaped by the reality which it revealed. … In the nun’s case, her behaviour was striking not for the virtues it expressed, or even for the good it achieved, but for its power to reveal the full humanity of those whose affliction had made their humanity invisible. Love is the name we give to such behaviour.

Someone being Christian is no guarantee that they will treat others like they are inherently valuable, precious, loved, immortal creatures. But Christian faith certainly offers the resources to draw on to make that hidden reality plain: that the most ill or traumatised person, the most different or despised, the most inconvenient or unpleasant or dangerous, carries within them, indelible and potentially glorious, the image of the God who values them.

How might our conflicts over human rights be transformed if more of us truly valued our neighbour – enough to pursue their rights ahead of our own?

Natasha Moore is a Research Fellow at the Centre for Public Christianity. She is the author of The Pleasures of Pessimism and For the Love of God: How the church is better and worse than you ever imagined, the 2020 Australian Christian Book of the Year.

This article first appeared at The Gospel Coalition Australia.